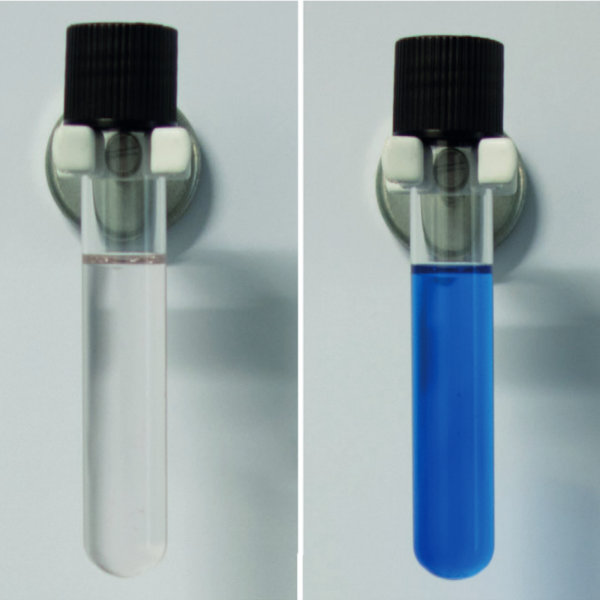 10 mg spiropyrane are solved in about 10 mL xylene (or toluene) in a test tube with screw cap. The solution is then distributed to three testtubes with screw caps. Testtube no. 1 is kept at room temperature, no. 2 is heated in a waterbath to roughly 60 °C. No. 3 is cooled in a beaker to about 0 °C using an ice-water micture.

Testtube no. 1 is irradiated with violet light (λ = 400 nm) or UV-Light (λ = 365 nm) from an LED flashlight. Within 1-2 seconds the solution changes its color to blue. The coloration fades within 20-30 s after the flashlight has been switched off.

The irradiation is repeated with the heated sample in testtube no. 2. The coloration is one again immediate; but it fades within less than 5 s after swtching the flashlight off.

Instead of using a spiropyrane solution in xylene (or toluene), the experiments for creation and destruction of the blue substance (merocyanine, an isomer of spiropyrane), an "Intelligent Foil" can be used. The flashlight is placed directly onto the foil for irradiation and for warming and cooling the foil it can be submerged in warm or cold water.